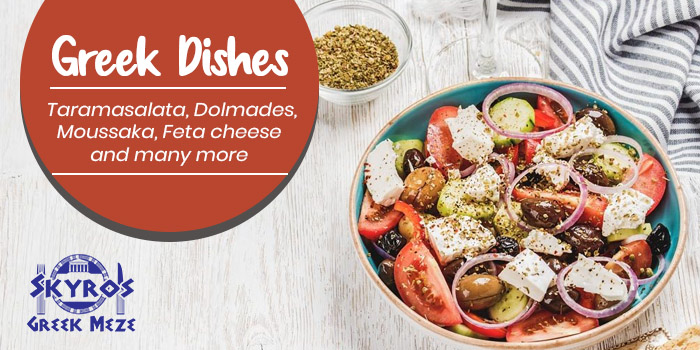 Whenever planning for a vacation is going on, the first choice for the trip is always Greece. No doubt, the destinations in Greece are worth approaching but the predominant reason to spend the vacation in Greece is to delight your taste buds with amazing greek dishes that do not at all produce a negative effect on your health. Greek food is luxurious, nutritional, healthiest and the tastiest food in the world. For this reason, greek restaurant Sydney can fetch that much traffic from the foodies. So in the ensuing information, the reader will get to know, which greek dishes offered by the Skyros Greek restaurant have created a taste anchor in the minds of the foodies.

Who does not enjoy the delight of the popular dips with the dishes? The dips like tzatziki which is made up of yoghurt, garlic & cucumber, creamy puree of the split pea which is known as the fava and many more. But the favourite among those is the much-admired taramasalata. Taramasalata is made up of the fish roe (pink and white). This delightful dish is admired with the potato and the bread base. This can be enjoyed with the enhancement of flavours by drizzling the virgin olive oil and squeezing lemons.

We are well-aware of the fact that the incorporation of olive oil in Greek dishes is a must. It is because the olives are cultivated in Greece at a high pace. For this reason, olive is used as a special innard not only in the dishes built in the salad as well.

There are so many variations of the dolmades that one can get it customised according to his taste and flavour. Some like the stuffing in the hollow tomatoes while others like it in the peppers or courgettes. The stuffing can be vegetarian and non-vegetarian according to the taste. For the non-vegetarian version, minced meat is taken into account and for the vegetarian version, the use of long grain rice with the herbs such as thyme, oregano and fennel is taken into account.

Those who do not like to consume the aubergines are sure to start living it after eating the moussaka. The tremendous blend of the flavours including the aubergines and the meat accompanied by the purees.

Famous grilled meat of Greece that is accompanied with a lot of vegetables tastes so good whenever delighted with the pitta bread and tzatziki.

The cheese of Greece is so famous that no dish in Greece is there which does not include the cheese. Even the salads themselves include the tremendous flavour of the flesh and the organic cheese.

The greek meal is incomplete unless it is followed by the sweet dish. There are lots of popular sweet dishes which are made with a combination of olive oil and honey. The amazing and delectable custard-filled pastry is enough to make your day.

If your mouth is filled with water merely on reading the description of the greek dishes, then there will be a flood in your mouth when you will encounter the dish on your table at Skyros Greek restaurant.