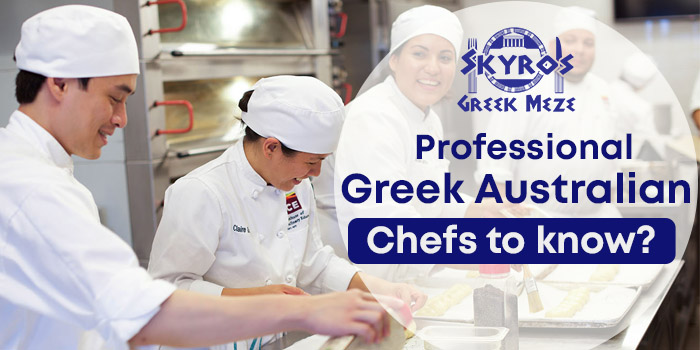 Which are the top-rated and professional Greek Australian chefs to know?

In this blog, we have compiled the list of Greek Australian chefs who made name in the food industry with the greek food they make. When you visit the best greek restaurant Sydney you will come across different dishes which are a clear-proof of their skills.

One of the well-known Greek Australian chefs whose work has been recognized in the publication ‘Good Food’. The first Greek Australian restaurant to open in the area by the name Cho Cho San and Greca. The interior design of the place was done with George Livissianis.

If you are looking for a pastry master then Chef Anna Polyviou does the magic as no one can. She is recognized by the trademark Mohawk. Initially, she started her career at Hotel Sofitel in Melbourne. Her work gives a clear intimation that she is the dessert queen. With time, her work was noticed and she had won the Excellent best Dessert in the UK.

Sydney’s Shangri-La Hotel noticed her work and there she developed exciting & unique skills. Well! She has made us look at the sweets in a whole new way as keeps the tradition alive but gives a modern taste to the sweets. She even published her book by the name, ‘Sweet Street’.

Peter coniists is one of those names who is the pioneer of modern Greek food and his work is noticed worldwide. In 2004, he got the privilege to cook at the opening ceremony of the Olympic games.

His restaurant named ‘Cosmos’ received a chef’s hat within 3 months and it was the first one on this list. Recently, he is working at Alpha restaurant. His cookbook named ‘New Greek Cuisine’ has got so much love.

Chef Matt has made his name in Australia and even worldwide. He has worked in different restaurants and local cafes. Since that time, he has started working with his life partner and business partner, Gemma Gange and their hard work has led to giving a new life to the Anglesea Surf.

Kathy Staples is one of those names who is extremely passionate about food, in general. Her cooking skills and understanding of food had come from her mother. The recipes she has learned have been passed down from generations. She opened a little shop, named Sweet Greek, Prahan market. There you can get some of the world-famous delicious savory and sweet dishes. Moreover, everything is made with fresh and seasonal items. She has even shared some of her cooking secrets in cookbooks with the names Sweet Greek Life and Sweet Greek. Apart from that, she has made appearances in different Tv shows.

No matter where you go, you will hear the name David Tsirekas. He is a Sydney-based chef whose dedication and skills have helped him reach great heights. Moreover, he is sharing his secrets about Greek food with the food lovers and he has even launched 2 Greek restaurants in Chicago which depict modern yet traditional foods.