What are the delectable greek foods which you need to try during your lifetime? 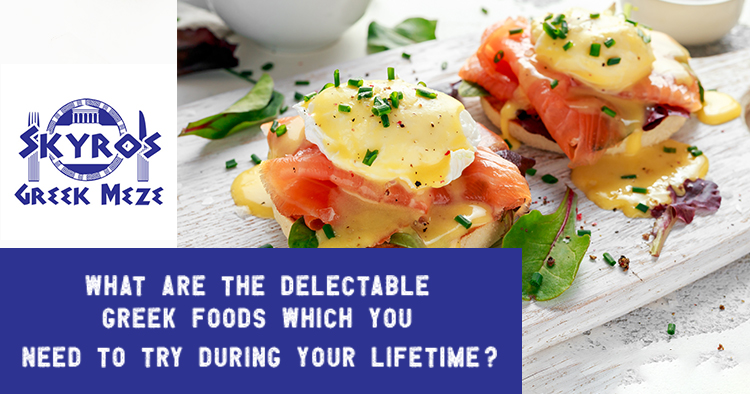 What are the delectable greek foods which you need to try during your lifetime?

We all know Greece is famous for its exotic locations and mythological legends. Apart from this, Greece is known for its toothsome greek food.

Moussaka is a greek traditional dish which is made with meat. It is made with a slow cooking method & the tomato sauce is added. For layering, eggplant, aubergines, and creamy bechamel sauce is added. It is one of the famous Greek dishes which you can find in all restaurants and taverns. Moreover, you will find this dish at greek restaurant or cafe in Sydney and it is mostly prepared during the festive season.

Souvlaki in Greek is known as Meat on a skewer. It is one of the integral parts of the Greek food menu. The meat either beef, chicken, or lamb needs to be seasoned properly, and then it is fried before it is served on the plate. Additionally, vegetables, french fries, and tzatziki sauce are added. This dish is served with pitta bread.

Keftedes is one of the traditional greek dishes. It comes in the category of appetizer. It is like a twist for the classic Italian meatballs but these meatballs are extremely crunchier which you have not tried anywhere else. It kind of comes as a starter & it is served with creamy sauce and pita bread. It is one of the easy Greek recipes which also needs to be tried at home.

If you are a health-conscious person and you want to try something unique on the vacations then do give this dish a try. It is extremely tasty and it contains almonds. It is one of the important parts of Greek food culture. In this case, the biscuits are consumed along with coffee or tea & sometimes milk is added to it. You can serve it along with snacks as these are one of the popular food options.

If you are a vegetarian then you should not be disappointed as there are many Greek dishes which you can give a try. There are appetizer dishes which are loaded with drained tomatoes, mixed with onion & mint. After that, it is deep-fried till the time fritters are formed. It is going to be served in the form of a mezze dish along with the tzatziki sauce along with that pita bread. It is one of the most preferred Greek traditional dishes which you need to give a try if you are visiting Greece.

Feta Me Meli is one of the Greek foods which you can eat in the form of an appetizer or dessert. The dish is prepared by wrapping feta cheese & in the batter of filo pastry dough. After that, it is going to be placed in the oven & then it will be baked. Once the dish is prepared, for that extra taste, honey is added on the top & then the perfect balance is created to get the savory & sweet taste. Trying this dish is going to help you get flavors in the mouth.