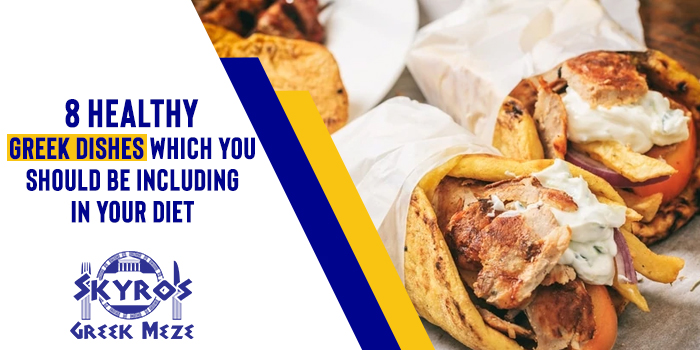 The greek food is considered the healthiest diet food in the world for ages, it is because of the inclusion of fresh fruits and vegetables in their staple diet. Many people are confused about the inclusions of the Mediterranean diet. The Mediterranean diet follows the greek guidelines along with the several patterns of the food of the adjoining or nearby countries. A greek restaurant in Sydney always tries to attract customers with the health benefits of the greek food items.

The greek people used to live a longer life as compared to the people of other countries. Also, they were not prone to suffer from any kind of chronic diseases.

So let us get to know some of the healthy greek foods:

The person who has ever tried the greek food must have admired the taste of the hummus. This is the oldest greek dish and the evidence can be found in the writings of Plato and Socrates. It is made up of the four ingredients:

The meaning of this tough-sounding word is eggplant salad. But more than a salad, it is a dip. The dish is made by roasting the eggplants followed by the blending and mashing actions. This is considered healthy since the eggplants are packed with nutrition values.

This low-calorie dip can go with any of the greek items. The refreshing taste of the cucumbers, yoghurt and olive oil makes the individual go to a new world. G

The best appetizer I have ever tasted, made with the gare leaves and stuffed with rice, herbs and meat. But the vegetarian version of this dish is also available in which you are allowed to substitute meat with any vegetarian item.

The large white beans are baked with vegetables in the oven. Usually, the beans give the best flavour if they are baked in the tomato sauce. These beans are the most nutritious because of which their existence can be found in many Greek dishes.

The traditional soup made with the following ingredients give superb health and taste benefits:

The stape lentil soup can or can not be made with the tomatoes. The soup has incredible healthy bonus points as far as the protein and fibre content is concerned.

All the greek restaurants are inclined to include souvlaki in their everyday menu because of its demand and popularity among greek people. The skewered and grilled pieces of meat have the potential to grip the taste buds to this.

The boiled green vegetables are served after being drizzled with lime juice and olive oil.

The traditional Greek dishes can catch the attention of the new generation. The dishes are considered the best in their original version. The slightest modifications are done where needed.