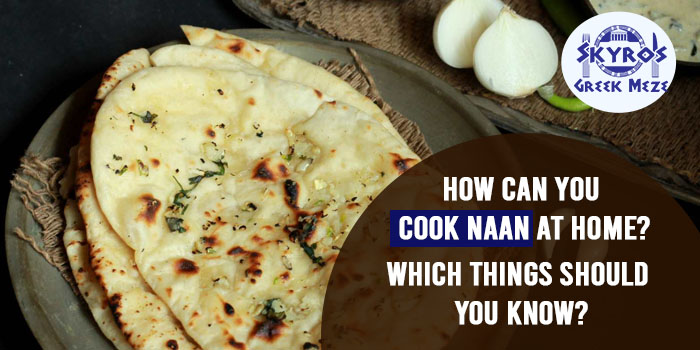 How can you cook naan at home? Which things should you know?

Who is not a fan of the garlic naan? Everybody craves it after every alternate day. But as far as the lockdown is concerned, we have to catch a hold on our craving, because restaurants are closed. But do not get disappointed. If you strongly crave garlic naan, then we are here for you with the best recipe to make the garlic naan.

Know something about Naan

Naan is something that is a must to incorporate items of every Indian wedding and occasion. Every one of us still remembers when our parents took us out for dinner at a good restaurant, they always ordered naan.

Naan is not something that is made in every Indian house regularly. It is like a special item which is enjoyed on special occasions.

What are the alternatives of naan?

Frankly speaking, none can replace naan but if we are ready to cooperate with the less tasty alternatives, then we can surely say it’s roti and paratha.

For Indians, the naans come in the first priority which is followed by the roti and the paratha.

What is the naan made of?

Naan is made with the following ingredients:

How is naan cooked?

There are so many ways by which the ann can be cooked to perfection. But when people consider ordering the naan, they want to taste the traditional version. The authentic naans are cooked in the clay oven which gives the smokey and the clay flavour to the naan. But nowadays people do not have a clay oven, so they prefer to cook it on the stovetop.

Modern ways to make the naan:

You can consider the use of the following if you do not find the clay oven and large stovetop as the convenient naan cooking option:

When we are cooking something at home then we make sure that the hygienic preparation is done.

Cooking garlic naan at home is one of the quickest, tummy-filling and tasty options that everybody admires.

When you are cooking garlic naan at home, you dominate the proportions of the various ingredients. You can decide which ingredient you would like to add a little bit more and which not.

Take a bowl. Measure 450 grams of the whole purpose flour and put it in the bowl. Mix it with 1 tablespoon of salt.

If you are considering using the kneading machine, then add the following ingredients all at once:

But if you are kneading it with your hands, then gradually add the lukewarm water and make sure to oil your hands which will prevent the flour from sticking with your hands.

Once the dough is prepared, now transfer the same to the oil greased bowl.

It’s time for the dough to rest. Let it rest for approximately 60 to 90 minutes. Once the song has been raised after resting, punch it which will help to release the air.

At this step, you will need melted butter (3 tablespoons), minced garlic and cilantro which should be finely chopped. Roll the naan and add all the items mentioned in this step.

The cooking depends on the method you have chosen. If you have chosen to cook it on the stovetop, then there are some different techniques for you to know. On the other hand, if you prefer cooking in a clay oven, then you have to know such things about it.

If you are interested to know about those techniques, then drop us an email, we shall surely publish our next blog post on this topic.