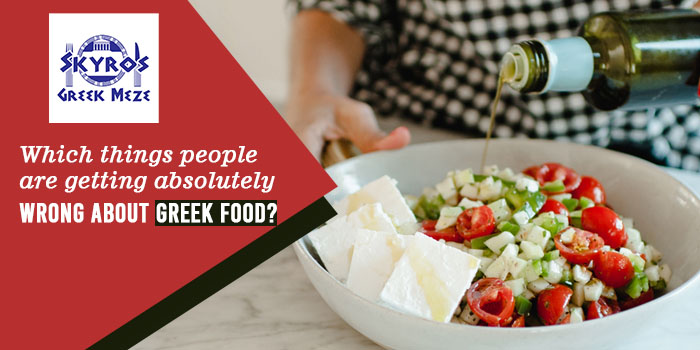 Which things people are getting absolutely wrong about Greek food?

When something gets popular and trendy, it is quite evident that rumours and false stories come into existence. So how can Greek food be spared in this regard? According to the owners of the Greek restaurant Sydney, following myths about greek food are spread in the world which needs to be abolished because in some way or the other they can cause harm to the reputation of the cuisine. So in the below-mentioned piece of information, we shall be getting to know more about these myths and what is the true story behind them:

According to many people, greek dishes do not include the necessary use of Olive Oil. This oil is a preponderant ingredient in Greek dishes. So how can Greek people let this aspect forego if it is the recognized symbol of the Greek dishes?

So there is no truth in that myth and greek make efficient use of Olive Oil. This oil is to be used in moderation because there is no use in dipping the salad in the oil and making it sound like the dripping salad.

Not necessarily, every dish that includes either feta or oregano or even both of them is greek. To illustrate this we can take help of the simple example: The pizza in Italy usually includes the Parmesan cheese, so it does not mean that if Indian sandwiches include the use of the Parmesan cheese, then these would be called Indo-Italian sandwiches.

If one cuisine makes extensive use of one particular kind of ingredient, then it never means that the particular ingredient gets associated with the cuisine. The same happened with the pork and the lamb. No doubt, greek dishes quintessentially involves the use of pork and lamb, but there are other cuisines as well which like to use lamb and pork to intensify the taste.

So to all the rumour spreaders and believers, it is suggested that whenever you visit a restaurant that serves different cuisine, do not insult their cuisine by associating it with Greek cuisine.

There are so many items that Greeks use a lot and end up getting associated with them. Pita bread which is the favourite food of the Greek natives has gotten its flavours from the traditional Mediterranean cuisine.

One rumour which we have encountered is about the dips. It says that greeks do not make substantial use of the dips. But again it is a false fact which we want to burst at this time. Because Greeks are a huge fan of the dips and they love the following kinds of dips the most:

The symbol of popularity is the number of rumours spread to undermine its popularity. But we do not want to flaunt these false rumours and wanted to tell you the truth behind them.