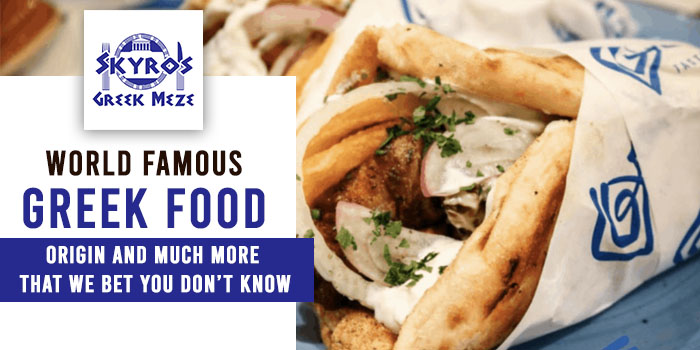 People are mad about Greek food. Although it is often taught the children that sharing is caring but when it’s come to the greek dishes, then nobody wants to share a bit of it with even his or her life partner. According to a waiter who was working in one of the famous greek restaurants in Sydney, There arrived a couple who were unmarried, the guy placed the order by saying, “Bring one souvlaki buy putting in the same plate for both of us”. The girl immediately replied, “ I love you baby, but I won’t share my food with you. So please bring two separate plates.” When we narrated this incident, we were shocked about the love and madness of the girl and the greek food. Anyhow, no wonder, why she had behaved in such a way!

As we all know, the rise of greek community came into existence from Melbourne. In the beginning, the flavour and the admiration of the greek food were limited to only that area. But over time, greek cuisine made its space all across the world.

The first country which recognized the taste and flavour of greek cuisine was Australia. But still, people didn’t know where the ideas of doing modifications with the food items are clicking in the mind of the Australian chefs. No sooner the repeated tasty dishes began to come into the origin than the people grew curious about the genesis of the same.

We all know which potential ingredients are being used in Greek food. Those innards do possess significantly high nutritional value. Nobody likes to eat sesame seeds despite knowing their importance for health. Therefore, Greek people felt the need to bring out creativity. Thus they found possible ways to make the people eat the same seeds happily. And now who does not like the:

Owing to the nutritional value, people often build up a thought that the greek food would not be tasty as it possesses so many nutritional benefits. But Greek cuisine has surprised chefs all across the world with its power to infuse variegated nutrients by not doing away with the taste. For this reason, the kids even like it too.

We are aware of the fact that a dish would not be deemed associated with Greece if it does not involve even a bit of olive oil and feta cheese. Greek people do not care about money when it is about their health. We acknowledge the fact that to use olive oil in all the cooking activities is expensive but the greek people are more concerned about their health and not about the money. The use of feta cheese does not only add to the taste of the dish but it is prepared freshly with organic milk each time when it is to be used.

If after reading the above-mentioned information. The taste buds have started disturbing you, then Skyros Greek restaurant is open for you to #Happify your tastebuds.